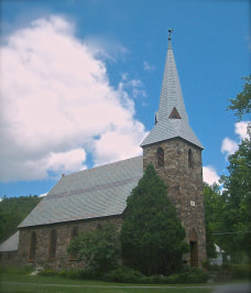 Although known by many different names over the past 140 years, the mission of this church has remained the same; to welcome all who wish to worship here.

Mr. George H. Cramer commenced construction of the building in 1876 as a memorial to his brother John Cramer. Built of native rough stone it consisted of a tower and belfry at its east and a chancel at the west displaying a handsome stained glass window also dedicated to his brother. Displeasure with the progress caused Mr. Cramer to unceremoniously close down the job, leaving the building available for use but possessing a barn-like floor, unpainted and soiled walls, and a generally uncomfortable and unwelcoming atmosphere. Called the Union Evangelical Church, it was dedicated to the worship of Almighty God on August 12, 1879. At that time the church and the property on which it rests were presented by Mr. Cramer to the then trustees, G. H. Cramer, Jefferson Smith, and Dr. Edwin L. Patrick. Unfortunately the disrepair of the building reflected upon the behavior of the parishioners. Children were unsupervised, youth both male and female munched apples and tossed chestnuts among themselves, while the young men came and went as they pleased, frequently disrupting the service. During its first few years the church was served by local Methodist ministers and even an itinerant evangelist who offered to preach without pay.

In 1891 a new resident in the area, himself a minister, Dr. Henry R. Stiles, sought outside help to improve both the physical and spiritual conditions of the church. Joining Dr. Stiles were, among others, his wife; Mr. George H. Yewell, a popular artist of the times; General H. E. Tremaine; George H. Cramer and his family and many of their friends. The Hillview Independent Church was organized and sufficient donations were received to provide a more suitable atmosphere for the worship of God. The renovated edifice was dedicated in January 1892. It adopted the Apostle’s Creed and used as its Confession of Faith the following: “I love the Lord Jesus Christ, and intend to lead day by day a consistent Christian Life and to strive to attain unto and live the Christ Life through the help and in the name of the Father, of the Son and of the Holy Ghost, Amen.”

The gift of additional land by George H. Cramer and building expenses paid by his sister Mrs. John K. Porter made possible the erection of the parsonage in 1894. This allowed the calling of year-round ministers to the church. In 1914 the church’s name was changed to St. John’s Community Church and it began an affiliation with the Albany Episcopal Diocese which lasted until 1961 when it finally became known as the Diamond Point Community Church. It remained a year-round church until 1932 although often was served by both ‘summer’ and ‘winter’ pastors.

Over the years many generous memorial gifts have enhanced the church including the stained-glass side windows; the magnificent eleven tower chimes in memory of former Senator Frederick W. Kavanaugh and made by the famous Meneely & Co. Of Watervliet, NY; pews; regilding the arch in the front of the altar as well as the top section of the altar; the Allen organ; pew cushions; flags; Bibles and hymnals.

​Numerous denominations have been and continue to be represented in the church including Episcopalian, Presbyterian, Evangelical, Methodist, Baptist, Lutheran, and United Church of Christ.